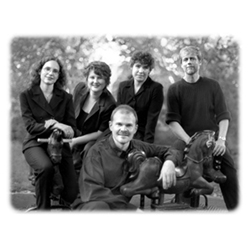 Dulces Voces (Sweet Voices) is a vocal ensemble specializing in secular and sacred music composed before 1750. The group has an eclectic repertoire which spans periods from chant and Burgundian motets to Monteverdi and Purcell.

Dulces Voces is based in Lincoln, Nebraska. The ensemble performs mostly a cappella music and has no conductor or advisor, therefore it draws on its members for repertoire and performance practice. The members come from varying backgrounds and professions, and all profoundly love making music together.

Dulces Voces was founded in 1993. Their premier performance was a concert produced by Musica Antiqua of Lincoln in April of 1993, called A Joyful Noise, at St. Mark’s on the Campus Episcopal Church in Lincoln, Nebraska. In September of 1994, Dulces Voces started a long association with NET Radio (formerly the Nebraska Public Radio Network). Through the years NET Radio listeners have enjoyed broadcasts of our concerts on Sound Stage, hosted by Chris Kohtz and Nebraska Concerts, hosted by Genevieve Randall. The group has performed throughout the U.S., performing new works by Victoria Bond, John Muehleisen, Kurt Knecht, Andrew Smith, and Tyler White.

Dulces Voces has independently released a CD, Court and Chapel. This CD is available for sale at all performances for $15.00 (price includes Nebraska state sales tax). You can also purchase CDs at either Barnes and Noble location and the Sheldon Gallery of Art in Lincoln, Nebraska. Visit us on Facebook and follow us on Twitter.