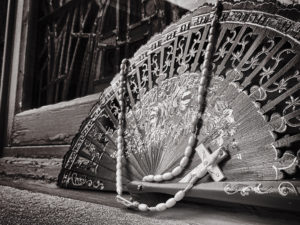 Songs of Love & Piety is a concert of vocal music performed by the “sweet voices” of Dulces Voces.

This concert features sacred and secular vocal music from the 14th to the 20th century, and from the Iberian peninsula to South America.

Freewill offerings are welcomed. We look forward to seeing you there!

La rosa enflorece, Traditional Sephardic, arr. Angelina Figus
The rose flowers in May.
My soul dims, suffering from love.
Nightingales sing and sigh of love
And passion kills me, increasing my pain.
Come more quickly, my dove,
More quickly to me,
More quickly you my soul: I feel myself dying.
Cuando el Rey Nimrod, Ladino Folksong
When King Nimrod went out into the fields
He looked at the heavens and at all the stars
He saw a holy light above the Jewish quarter
A sign that Abraham our father was about to be born
Abraham our father, beloved father
Blessed father, light of Israel.
Then he commanded all the midwives
That every pregnant woman
Who did not give birth to her baby would be killed at once
because Abraham our father was going to born.
Terach’s wife became pregnant
and day after day he asked her
Why do you look so distraught?
She already knew the good that she had within her.
Let us greet the godfather and also the circumciser
Because of his virtue may the Messiah come
To redeem all Israel
Surely we will praise the true redeemer
The true redeemer of Israel.

Ojos claros serenos, Eduardo Grau (1919–2006)
Eyes serene, so clear, if you are praised for your kindly gaze why, when you look at me, do you look angry? If, when you are kinder, you look more beautiful to the beholder, do not look at me with anger, so that you do not appear less beautiful. Ah, raging torments! Eyes serene, so clear, even if you look at me like that, at least you look at me.
Se equivocó la paloma, Carlos Guastavino (1912-2000)
The dove was wrong. The dove was mistaken. To travel north she flew south, believing the wheat was water. Believing the sea was sky, that the night was dawn. That the stars were dew, that the heat was snowfall. Your skirt your blouse your heart, her home. She fell asleep on the shore, you at the tip of a branch.

O Virgo splendens, Llibre Vermell de Montserrat (14th Century)
O resplendent Virgin, here on the high mountain, glowing with miraculous wonders where the believers from everywhere ascend.
Ah, with your gentle loving eye behold those caught in the bonds of sin, to let them not suffer the blows of Hell, but let them be with the blessed by your intercession.
Iam nubes/Iam novum, The Montpellerier Codex (13th Century)
Part 1:
Now is the cloud dispersed, now appears the Milky Way, now is the flower plucked from the thorn, now rises Mary.
Now is the light seen, now is the path revealed; now may pious Mary pray for us, that we may enjoy the glory.
Part 2:
Now the new star rises, now appears the Milky Way; now is born of Judea, now rises, Mary.
Now is heaven opened to us, now may Christ give us joy in the heavenly court, whose daughter and mother you are, O Mary.

O Crux, Ferdinand Sor (1778-1839)
O hail the cross, our only hope in this passion tide.
Grant increase of grace to believers and remove the sins of the guilty.
Christus factus est, Vicente Goicoechea (1854-1916)
Christ became obedient for us unto death,
even to the death of the cross.
Response. Therefore God exalted Him and gave Him a Name which is above all names.

Audivi vocem de caelo, Duarte Lôbo (1563-1646)
I heard a voice from heaven saying unto me: Blessed are the dead who die in the Lord.
Oculi mei, Estêvão Lopes Morago (1567-1643)
My eyes are ever upon the Lord: for he shall pluck my feet out of the snare. Turn to me, and have mercy upon me.

Imperayritz — Verges ses par, Anonymous Spanish (14th Century)
Empress of the joyful city of paradise, where eternal happiness cleansed of sin exists, full of virtue,
Mother of God by divine wish. Gentle Virgin with angelic face, thus in God’s eyes most gracious,
Be patient with the important faithful who pray to the celestial King.
Merciful Virgin without peer, we trust in you to defend us from evil and not to be desolated by our daily and ordinary failing.
Above all, shelter us under your royal cloak of mercy, since whoever is abundant in virtue can transform muddy clay, human flesh being weak.
Mariam Matrem, Llibre Vermell de Montserrat (14th Century)
Praise Mary, the Virgin Mother, exalt Jesus Christ wholeheartedly.
Mary sanctuary of ages, protect us. Jesus, our protecting refuge, hear us.
You are both already fully among us, truly a safe place of shelter.
Cantiga 166: Como podens per sas culpas, Alfonso X., el Sabio (1200-1277)
This is how Holy Mary cured in Her church in Salas a man who was crippled in his body and limbs.
“As men may be paralyzed because of their misdeeds, so may they then be made whole by the Virgin.”
It happened that a man, because of sins he had committed, was crippled in his limbs from an illness he had suffered.
He remained thus for five years, unable to move, so badly twisted were all the members of his body.
Because of this terrible infirmity that he had, he promised that if he got well, he would go to Salas at once and would offer Holy Mary a pound of wax each year.
He got well immediately and had no further complaints.
For this miracle they thanked and praised Holy Mary because She frees the sick from suffering and pain, and furthermore,
She is always praying for us sinners, hence we should all forever be Her loyal subjects.

This entry was posted in Concerts.